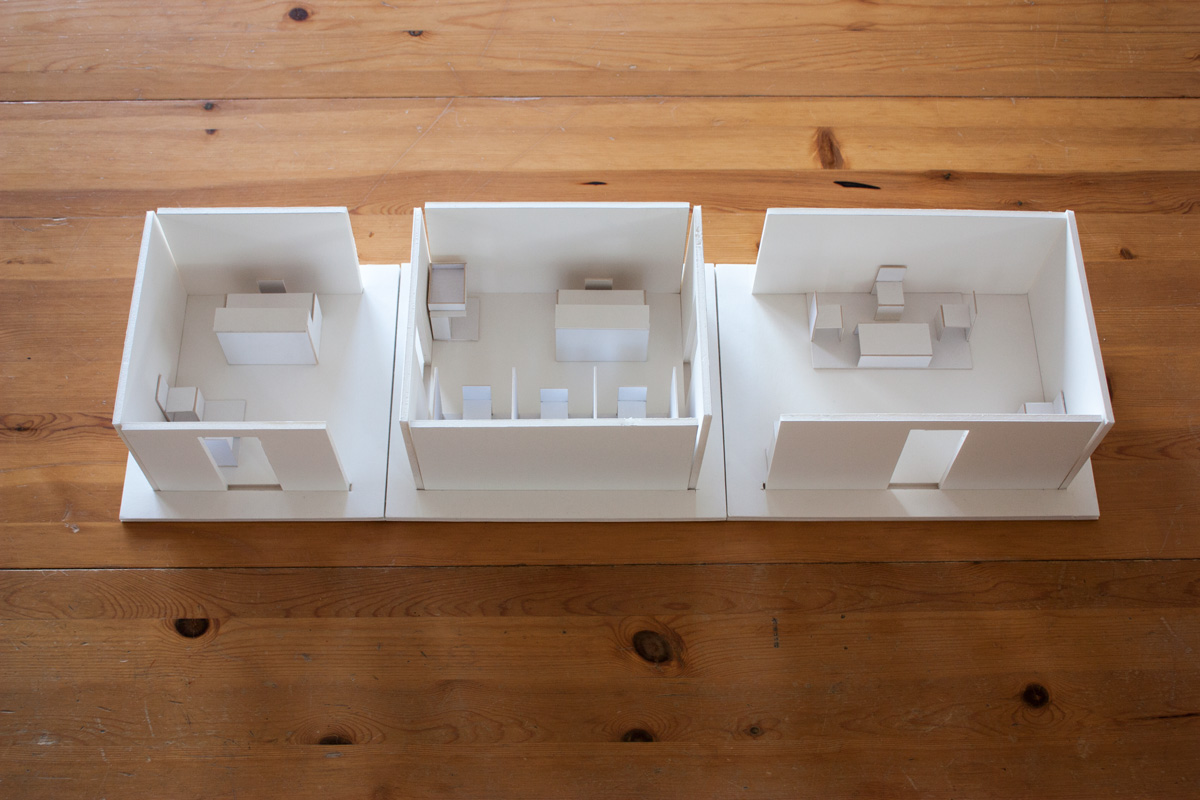 I was approached by a consultant for Access to Medically Supervised Injection Sites Edmonton (AMSISE) to create a 3D physical model of a supervised injection site for visualization and public engagement objectives. The model would also be featured during a future news conference announcing the proposed locations of supervised injection sites in downtown Edmonton. Finally, the model would be used during community engagement sessions to educate the public about the services through visualizing the site's layout(s), the function of each area, and the flow of users.
Brief
Since the model's primary purpose was to help facilitate discussion during community engagement sessions, it had to be designed for durability and flexibility. This ensured the model could be handled by many people over multiple sessions, and could be reconfigured to accurately reflect the different interior layouts of each proposed site.

The model had to appear clean and simple with furnishing elements to suggest the functions of each area within the site, but not overly detailed, as it would detract focus from receiving proper feedback about the location's functional qualities.

Finally, the concept of supervised injection services carries significant challenges as sociopolitical issues are brought to the forefront of discussions. The idea of using a low-key, low-tech 3D model helps to move the discussion forward by presenting the system and functions of supervised injection services in a neutral, non-partisan manner. Key stakeholders can learn how the services work, make recommendations and form personal opinions about the initiative after engaging with the model.
Challenge 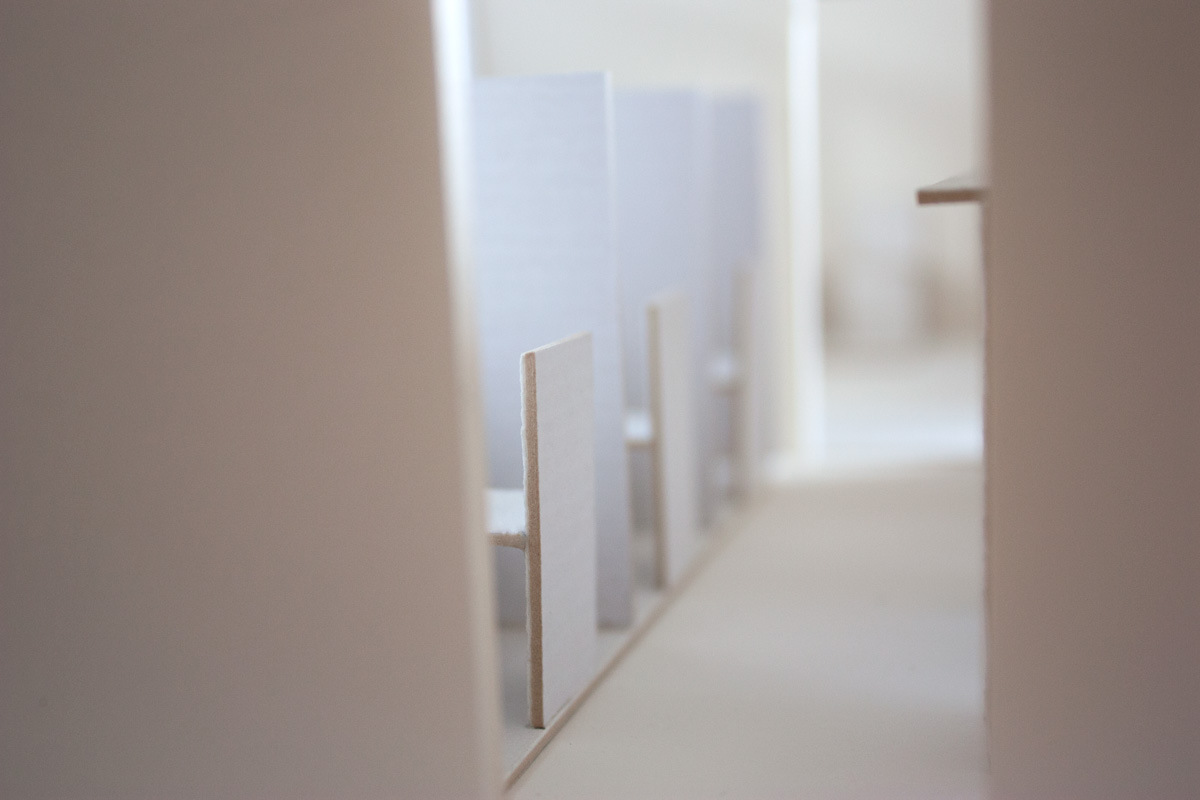 The prime example of a successful supervised injection service in Canada was Insite, located in Vancouver, BC. It was vital to understand how Insite functioned, and what elements can be adapted or improved for Edmonton's proposed locations. My consultant provided valuable first-hand accounts of touring Insite and shared photos of the experience to help me craft the model.

The proposed supervised injection services have three primary service areas: an intake room (for greeting and receiving patrons), an injection room (for supervised drug consumption), and a monitoring room (for post-use health monitoring and promotion of social services). It was important to distinguish them in the 3D model by using contrasting room sizes and furnishings. Furthermore, the proposed sites were embedded inside existing social agencies that serve vulnerable and homeless people, which was taken into consideration to ensure the model did not appear to be a separate, standalone health service.

I conducted research into architectural model crafting to understand the appropriate scale for showcasing interiors. Based on research, I decided on a 1:24 scale because it was large enough to accommodate the movement of furnishing pieces within the model, while small enough to allow for portability between public engagement sessions.

I also researched furnishings and ergonomics in healthcare environments to ensure the crafted pieces reflected accessibility standards. For example, a sink without a cabinet  underneath would be selected to accommodate people who use wheelchairs.
Research & Discovery 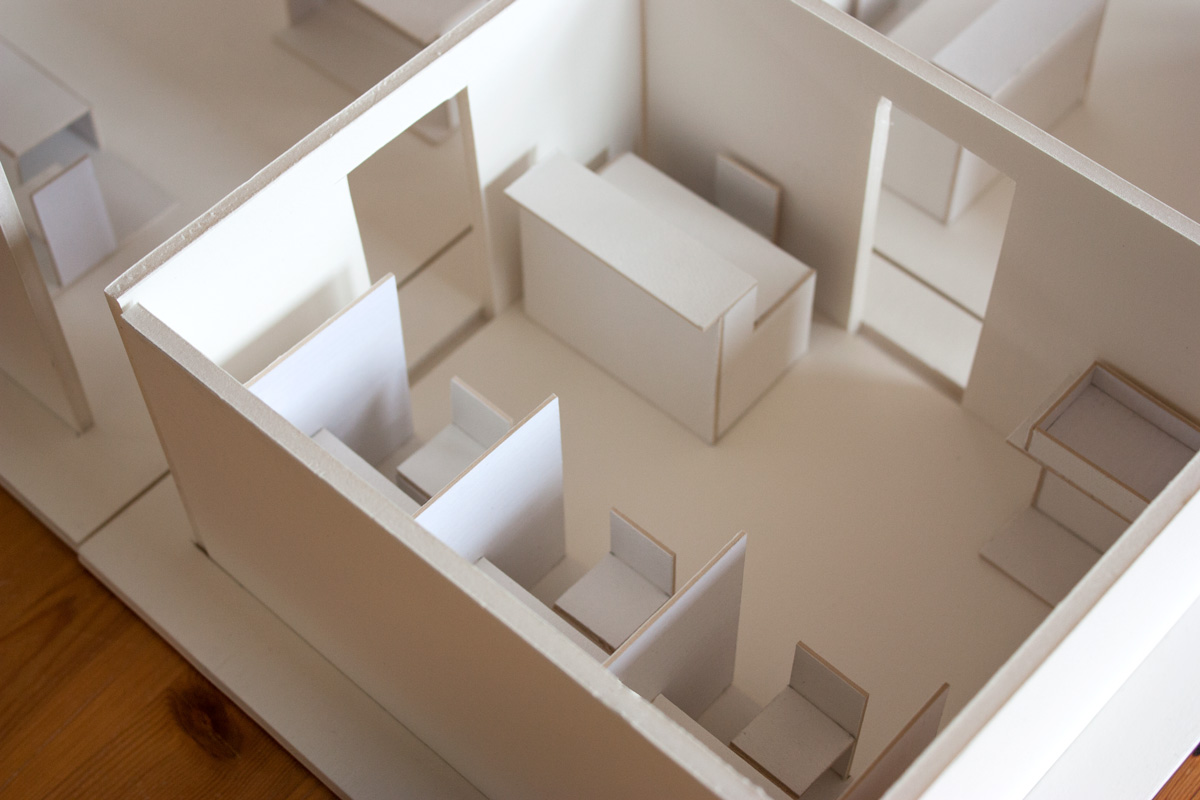 The 3D model was built using foam board and mat board. The materials selected for being easy to work wirth and for their neutral appearance - clean look, suggestive but not prescriptive, and a blank canvas for stakeholders to visualize their preferences.

Each service area was built on a separate platform so the overall model could be rearranged to reflect each proposed location's interior configuration. It also allowed each room to be brought into focus during public engagements so workshop participants could walk through the room from all angles. Finally, the rooms had removable walls so they could be switched between a solid wall or a doorway wall, which maximized the model's flexibility for testing different ideas on traffic flow and furnishing placements.
Solution 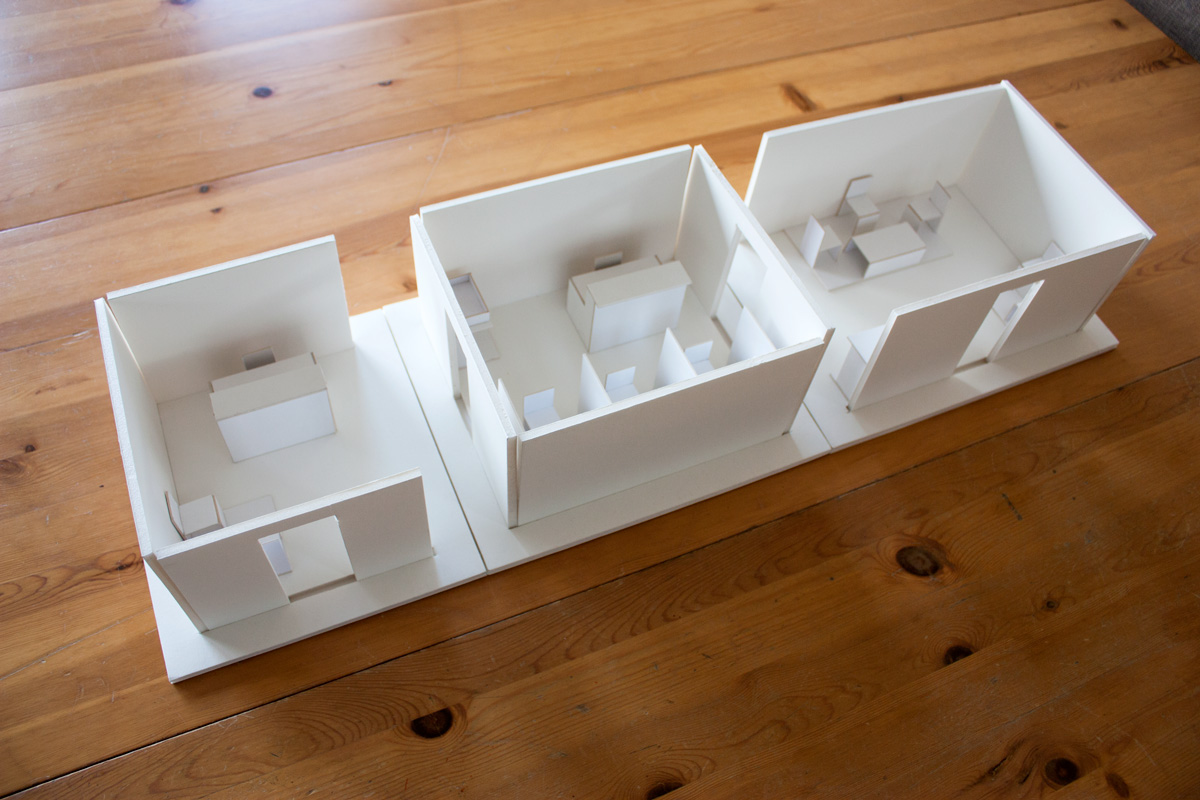 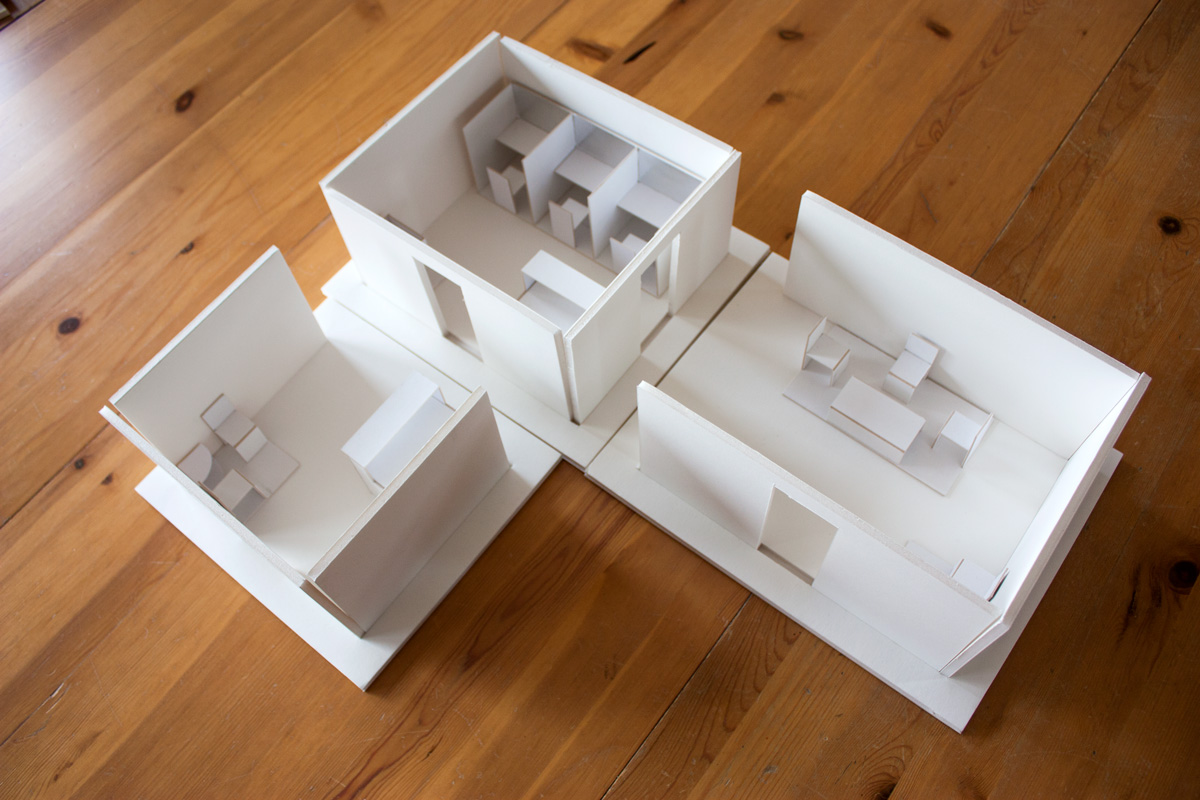 The injection room service area was the main focus of the model, since it was a unique health service and would generate the highest need for education and discussion. I focused on how people would use the injection stations and crafted them to resemble recognizable furniture pieces, such as desks and vanities, giving it a feeling of personal space and privacy. The full-length mirror is an important component because it reflects the person's condition to the supervising nurse, ensuring a safety check.

Other pieces like the nurse's station and sink helped promote cleanliness and safety, both of which are key to changing misconceptions about supervised injection services. Ergonomics played a strong role in influencing the furnishing pieces, considering their functions and how they might be used, which brought a humanizing factor to the space. 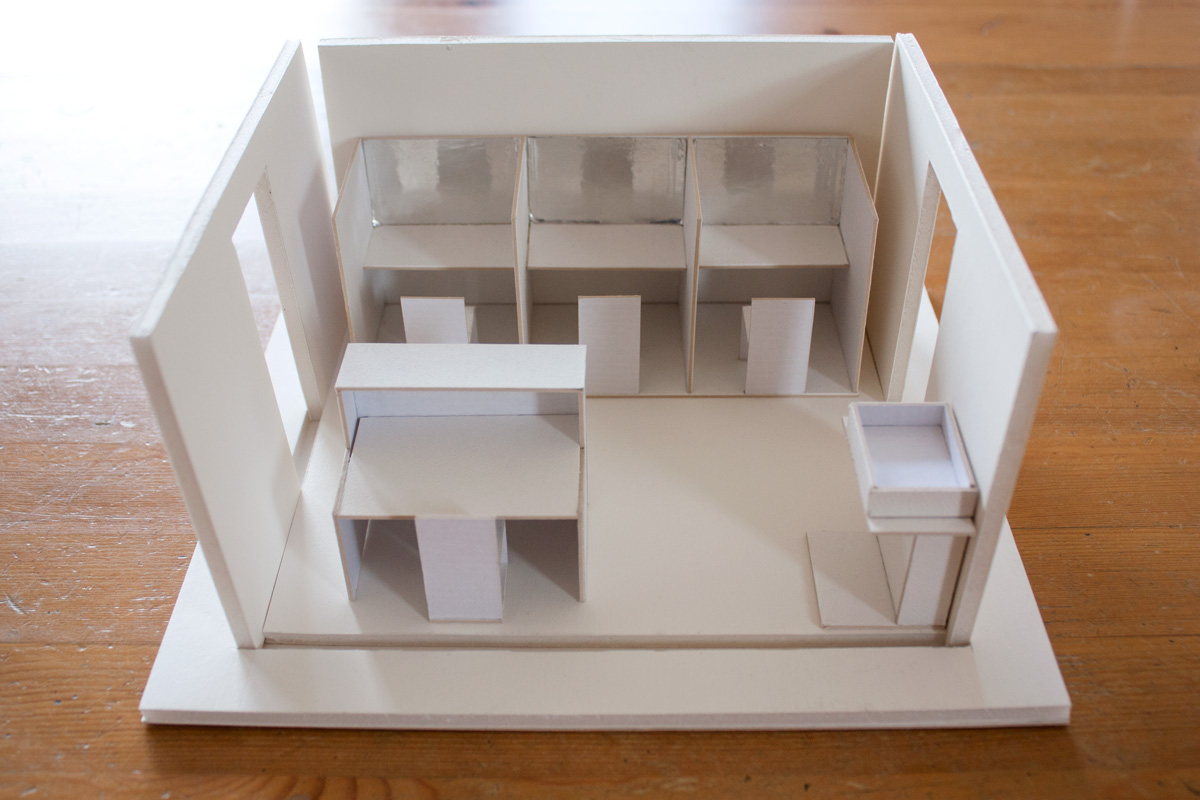 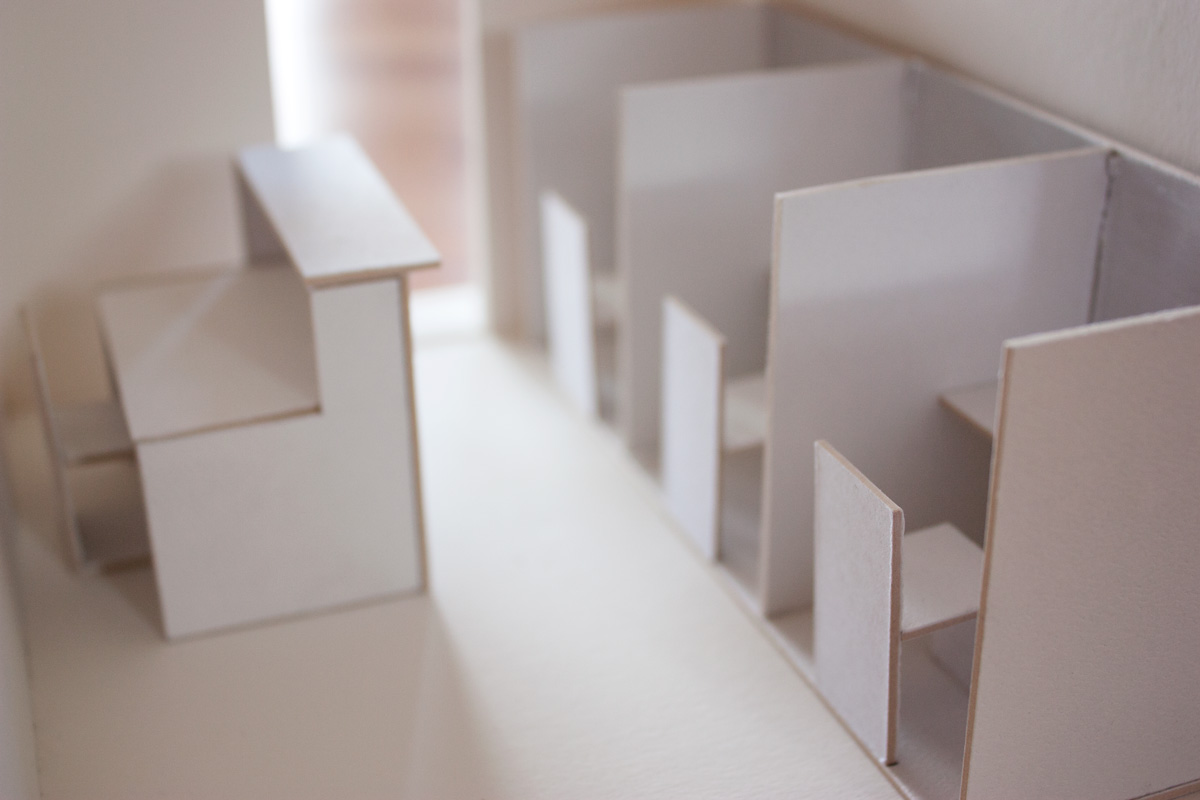 I carried the idea of human connection into the design of the furnishing pieces for the intake and monitoring rooms. The furniture suggests a safe and welcoming environment that connects users to "wraparound services", which are services that address housing needs, employment opportunities, healthcare access and peer/outreach support. For example, the corner seating arrangement suggests an intimate conversation between two parties, such as one-to-one peer support. The coffee table area suggests connecting with community members and establishing relationships with others. These furnishing pieces reinforce the concept of integrated supervised injection services that can provide much-needed services benefitting users' physical, emotional and mental health. 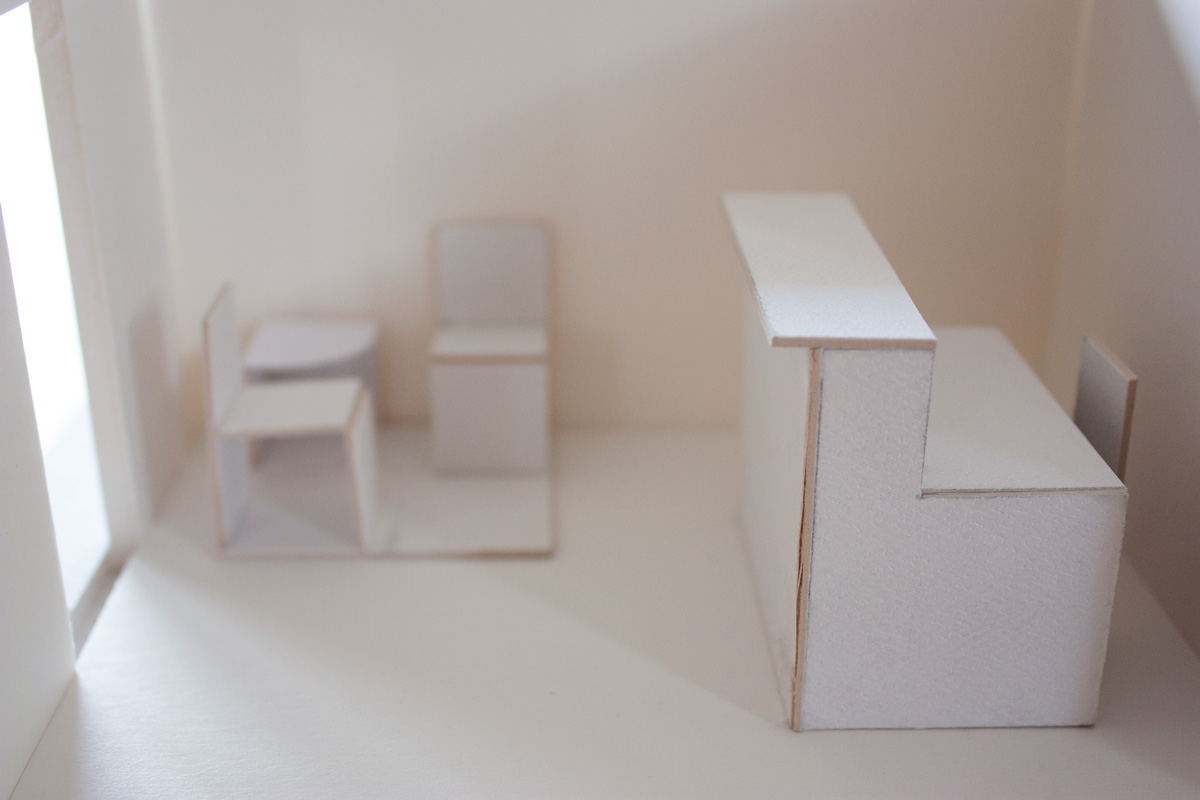 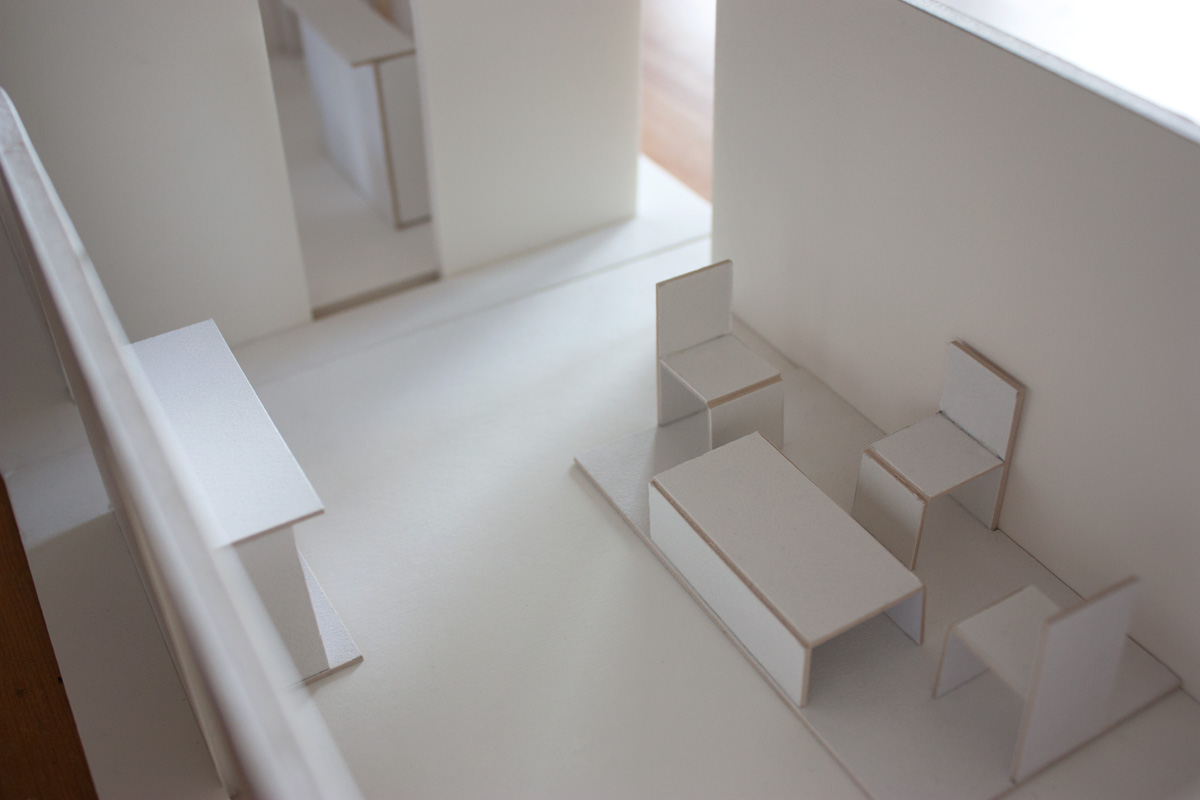 AMSISE was pleased with the resulting model. After spending 5 years researching and engaging with stakeholders to create the foundation of the services, the 3D model helped to validate their hard work and efforts in seeing their research come to life. They saw it as a major tool in public engagement, assisting with gathering feedback to improve accessibility and functionality of the services.

The model was highlighted at a major news conference announcing the project sites. It was heavily covered by local media, with many journalists using photos of the model to supplement their accompanying story. This helped AMSISE gain awareness for their work in laying the foundation for supervised injection services. The news coverage was predominantly neutral to positive, presenting the sites as an alternate community healthcare resource, which built support for the overall project.

The success of the model led to additional design work for supplementary communication documents. The documents cited services offered through each host organization and showcased how supervised injection services fit into an extended community health program. They were used in public engagement and education sessions, which involved key stakeholders such as community members, politicians and police services.
Results
Copyright 2021 lawrence ly
TwitterlinkedinInstagram